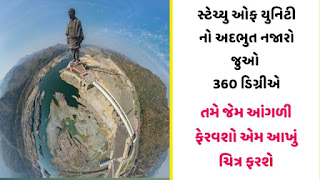 The statue of unity is the pride of the country, which has been laid and inaugurated by Prime Minister Narendra Modi, let us know some interesting facts about the statue of unity
The person associated with the history of India, who had held the hand of the country, when the rays of hope had stopped appearing. When the fear of the disintegration of the country was troubling, then this Lal of Mother India did that due to which even today her name comes on our tongue and our chest becomes wide with pride.

The name of that Indian freedom fighter is Sardar Vallab Bhai Patel, yes this was the person who, inspired by the thoughts of Mahatma Gandhi, participated in the freedom movement of India and built a grand country Due to this struggle full life, he became India’s First Home-minister and sub-prime-minister of the country. India always respects such fighters and tries to follow their footsteps.

Some special things related to the idol
Bronze coating has been done on the ‘Statue of Unity’, which makes it look even more attractive. To decide the length of this, lift facility has also been provided for the tourists. There is an exhibition hall on the roof of the memorial which depicts the life of Sardar ji, his struggles and achievements. This statue has been made in such a way that 200 people will be able to see this idol at a time