There are many species of snakes and we have seen many snakes, when a strange type of snake was seen in Gujarat, this snake looked like it had horns on its head, which made people curious.

Snakes are long legless carnivorous reptiles of the serpent subgroup that can be compared to legless lizards by the absence of eyelids and external ears. Like all squamates, snakes are vertebrates that can change their body temperature with the environment. Its body is covered with scales. Many species of snakes have more jointed skeletons than their ancestral lizards. The snake can swallow prey larger than its head due to the great elasticity of its jaw bones. 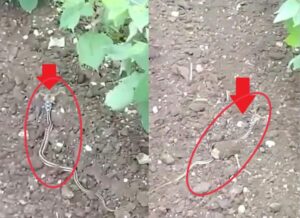 This video, which is going viral, is being discussed to be the boundary of Vadia village of Saila taluka of Surendranagar district. The snake that is seen inside the video is amazing, this snake appears to be white and black striped, but what is surprising is that it also has something like horns on its head. Due to which this video is becoming very viral