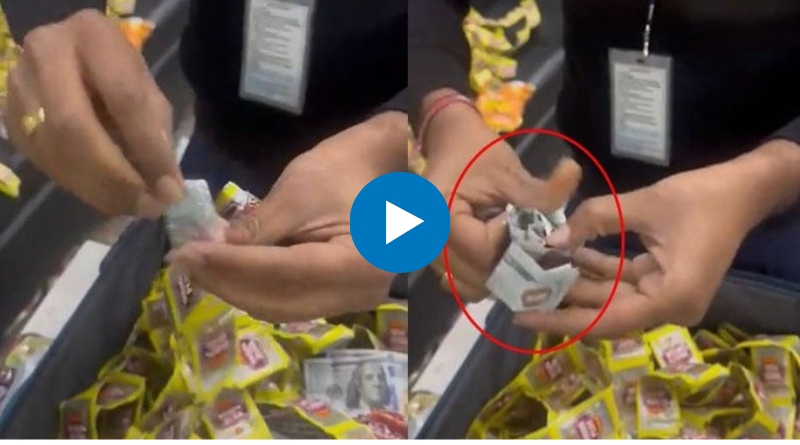 We see many times on social media that many videos are going viral. Then again a video is going viral in which a person hides money in gutkha padiki and carries it away. Everyone was shocked to see that video.

It is being known that this video is from Calcutta. Everyone was shocked to see such an experiment of this person. We also watch such videos many times. Many times gold, silver and drugs are also smuggled from foreign countries.

A team of customer service personnel at the airport searches for people when people resort to illegal means to smuggle gold, silver, drugs or foreign currency, sometimes people hide the items on their bodies or in bags or elsewhere. Netaji Subhash Chandra Bose of Calcutta has been caught internationally.

#WATCH | AIU officials of Kolkata Customs intercepted a passenger scheduled to depart to Bangkok yesterday. A search of his checked-in baggage resulted in the recovery of US $40O00 (worth over Rs 32 lakh) concealed inside Gutkha pouches: Customs pic.twitter.com/unxgdR7jSu

This person had hidden lakhs of rupees in Gutkhana pouch. At that time, the officials of the customs department were also stunned when they did not see this technique of catching him.

Yes, the person was preparing to go from Calcutta to Bangkok when the officers of the customs department based on the first found the goods while checking the luggage, when this packet was caught and four thousand dollar notes were found.